Development and growth are never politically neutral and cannot be interpreted from only a technical or macro-economic viewpoint. This article charts the intertwining of trade and investment patterns in the Horn of Africa with geopolitical trends and local dynamics, and highlights the entry points for conceptualizing political and business risks for FDI.

Rising geopolitical tensions have led to a resurgence in attention to the political aspects of trade and investment policy.[1] Examples of intersecting interests in areas such as dual-use technology and Artificial Intelligence (AI) raise the risks for companies active in those sectors, in terms of ethical considerations, issues of compliance, and potential human rights violations.[2]

These examples capture only a fraction of a broader issue. Trade policy, foreign direct investment, and domestic economic regulations have always been highly politicized tools that are closely intertwined with foreign policy objectives and domestic concerns.

Even between the most amicable governments, trade policy is never neutral. Therefore, it is not feasible to expect neutrality when geopolitical tensions are high. Attempts to support development or to invest beg the question: “Who benefits?”

Impact and risks analyses often focus on apolitical outcomes and symptomatic risks rather than the political root causes that drive impact.[3] By studying the intertwining of trade and investment patterns of the Horn of Africa with geopolitical trends and local political dynamics, this article seeks to highlight the entry points for conceptualizing political risks in trade policy and foreign direct investment (FDI).

One of the earliest definitions of politics – “Who gets what, when, and how” – reflects how deeply politics and economics are intertwined.[4] Politics reflects the criticality of resource allocation for a regime’s legitimacy, and its ability to coopt and or coerce constituencies to maintain its rule.[5]

Narratives highlighting an emerging Africa with growing markets may be driving perceptions of economic development and hence investments in the Red Sea region. However, political undercurrents are also driving more trade and investment, independent of the prospects of financial returns.[6]

Development and growth are never politically neutral and cannot be interpreted from only a technical or macro-economic viewpoint. Any aggregate economic growth figure obscures underlying details regarding the distribution of benefits associated with this growth, which invariably benefit some individuals or groups more than others. As such, investment programs and trade policy may be used politically in order to influence either a recipient state’s ability to allocate benefits, or to allocate benefits on a sub-national level between specific and politically relevant groups.

Even if focusing solely on the provision of collective goods – human rights protection, education, sustainable resource management – the question of who benefits remains. Any venture channelling or distributing economic benefits is, to some degree, an inherently political act.

Hence it is crucial for any approach to address the social and political patterns in the target location. Furthermore, how do such patterns influence a venture's operations? How do the operations relate to identified fault lines and politicize their presence?[7] Efforts towards best practice sustainable trade and investment require politically sensitive adaptations.[8]

To illustrate the politicization of trade and investment flows, consider the developments taking place in the Horn of Africa on the Red Sea’s western shores. During the last decade, interest in this region’s economic potential has been growing steadily. This trend has partly been underpinned by the optimism surrounding the economic performance of Africa at large, which has led to a surge of investments in the Horn region, from US$2.59 billion in 2010 to US$5.15 billion in 2018.[9] In addition, foreign investors have been motivated by the Horn’s geostrategic position along the Asia-Europe maritime trade route. The surge in FDI, which is often state-sponsored, has focused on maritime infrastructure and led to the proliferation of ports along both sides of the Red Sea and the Gulf of Aden.[10]

This investment spree has been largely dominated by two major players: China and the United Arab Emirates (UAE).[11] In partnership with local actors, both countries have sought to develop different infrastructure projects. In China’s case, the most notable example is the expansion of the Addis Ababa-Djibouti corridor, a set of ports, roads, and railways that connects the large Ethiopian market to global shipping trade routes. In parallel, the UAE is developing a port in Berbera (Somaliland) and a road connection to Ethiopia, thus creating an alternative to the Addis-Djibouti corridor. For both Beijing and Abu Dhabi – and for the state-owned enterprises (SOEs) or semi-private companies implementing their policies – strategies and investment choices in the Horn/Red Sea region have depended not only on the expected return-on-investment. Rather, decisions have also been, perhaps especially, determined by broader economic and political considerations.[12]

In China’s case, Beijing’s focus on promoting domestic economic development has been a major determinant of the country’s strategy abroad. Economic interactions with Africa have been used by China to access new export markets for Chinese companies, but also to outsource low-skilled jobs as Chinese firms move up the value chain. The latter is illustrated in Chinese investments in textiles in Ethiopia’s Special Economic Zones, where the use of Ethiopian labour in production helps Chinese companies produce at low cost. In addition, foreign policy considerations have also shaped Beijing’s investments in the region. For instance, China has leveraged investment flows to African countries – approximately US$368.1 billion from 2005 to 2021 – to increase its soft power and to gain diplomatic support on contentious issues such as that of Taiwan.[13] Moreover, China’s investments in logistics and digital infrastructure in the Horn have not been standalone efforts. For example, Djibouti hosts a Chinese multi-purpose port and is a key node in Huawei’s PEACE fibre-optic cable network. Through its Belt and Road Initiative (BRI), investments have been part of Beijing’s broader push to enhance connectivity across Eurasia and Africa.

Similar to China, the UAE’s decision to develop infrastructure in the Horn has been part of a broader strategy grounded in Abu Dhabi’s own domestic political and economic considerations. Besides being a player in the oil and gas sector, the UAE also perceives itself as a major trading nation. This has led the country to invest heavily in developing maritime infrastructure around the world, as exemplified by the wide array of ports controlled by the state-owned Dubai Ports World. The UAE’s investments in the Horn/Red Sea region should not be viewed predominantly from the individual cases, but as part of an effort to control trade flows in the region and diversify geopolitical alliances.[14]

Similar dynamics of politicization have characterized past investment flows by other countries and in different sectors. When Arab Gulf monarchies decided to massively invest in Sudan’s agricultural sector in the 1970s, their intentions were motivated by food security and profit considerations. But another consideration played a part: They wanted to shore up their regional position by keeping Khartoum allied.[15]

It is crucial that actors, whether state sponsored or private, are aware of the risks that arise from such politicization.

Political considerations also shape the impact of trade and investment flows on Horn countries themselves. Local actors on the receiving end are not passive spectators of foreign partners’ strategies. They are active players seeking to shape those strategies and leverage them to their own political advantage. At times, this may entail keeping healthy foreign exchange reserves to maintain subsidies on imported food staples. Other times, financial flows may be used for more parochial political advantages, for instance by directing investment towards specific areas or constituencies in order to secure political loyalty.

Such dynamics have been very much present in investment patterns in the Horn. When Arab Gulf countries invested in Sudan’s agricultural sector in the 1970s, the Sudanese government used such investment projects to build political coalitions and penetrate rival strongholds in rural areas.[16]

A few decades later, foreign investment also became a cornerstone of the development process in Ethiopia. This importance was reflected in the federal government’s decision to centralize the management of investment flows in a single institution: the Ethiopian Investment Commission. In 2014, the Commission was placed under the direct control of the Prime Minister. This enabled direct access to foreign exchange and the opportunity to directly invest in specific areas – and subsequently exercise discretion in allocating benefits, and costs, to certain constituencies.[17] Such centralization has remained a feature of Ethiopia’s investment policy throughout the country’s political transition.

This politicization of investment can create significant hurdles for actors seeking to invest in politicized sectors; even those not aligned with major political interests. In Ethiopia, foreign investment in the agricultural sector has been associated with the forced displacement of local populations.[18] During protests, increased resentment among the population has led to the burning down of foreign-owned farms.[19]

Similarly, the eruption of the civil war in Tigray in November 2020 has created major challenges for companies investing in Ethiopia’s recently liberalized telecommunication sector. For instance, the winner of the first bid is likely to face challenges in accessing funding following US sanctions, which aim to address government conduct surrounding the Tigray conflict.[20] Moreover, due to fears of damage to telecommunications assets following political unrest, the second bid launched by the Ethiopian government was shunned by a major African telecommunications operator.[21]

Politicization surrounding certain trade practices, sectors, and corridors reflects but does not fully acknowledge investment and trade policy as highly politicized tools influenced by a host of foreign and domestic considerations. Development and growth are not politically neutral affairs. Actors who fail to consider underlying political drivers in their impact assessments or political procedures incur potentially significant risks. Such risks are illustrated in the examples from the Horn of Africa and the Red Sea, although they can extend to far more developed countries.

On the one hand, this region’s geostrategic position along a major maritime trade route has attracted several external players, notably China and the UAE, which have implemented activist economic strategies largely shaped by their own political interests.

On the other hand, these strategies have had a significant impact on Horn countries, where local actors have sought to leverage the involvement of external players to their own political favor. With political incentives actively shaping investment and development patterns, investors not actively monitoring or managing the associated risks may find themselves lacking impact at best – and face significant operational and reputational risks as well.

This report would have not been possible without the contributions of Aisha Hassan and Mostafa Sadiqi, as well as the insightful comments from Peter Haasbroek.

[3] - On a firm level, this is reflected in ESG approaches, risk management and Due Diligence procedures. Matos, P. 2020. ‘ ESG and responsible institutional investing around the world: A critical review’. CFA Institutes Research.

[11] - Meester, J. and Lanfranchi, G. 2021. The UAE and China in the Horn of Africa, Clingendael. Note however that other states’, including US and EU, trade and investment strategies may also be politically motivated.

Jos Meester is a Senior Research Fellow at the Conflict Research Unit of Clingendael (CRU). His work focusses on the functioning of the private sector in conflict affected environments. He is in particular interested in supply chains spanning across political divisions, as well as the close relationship of political and private sector elites and its consequences for the stability of political power structures.

Guido Lanfranchi is a Junior Researcher at Clingendael’s Conflict Research Unit (CRU). He contributes to CRU’s Horn of Africa programme, with a focus on the role of the private sector in fragile and conflict-affected settings. 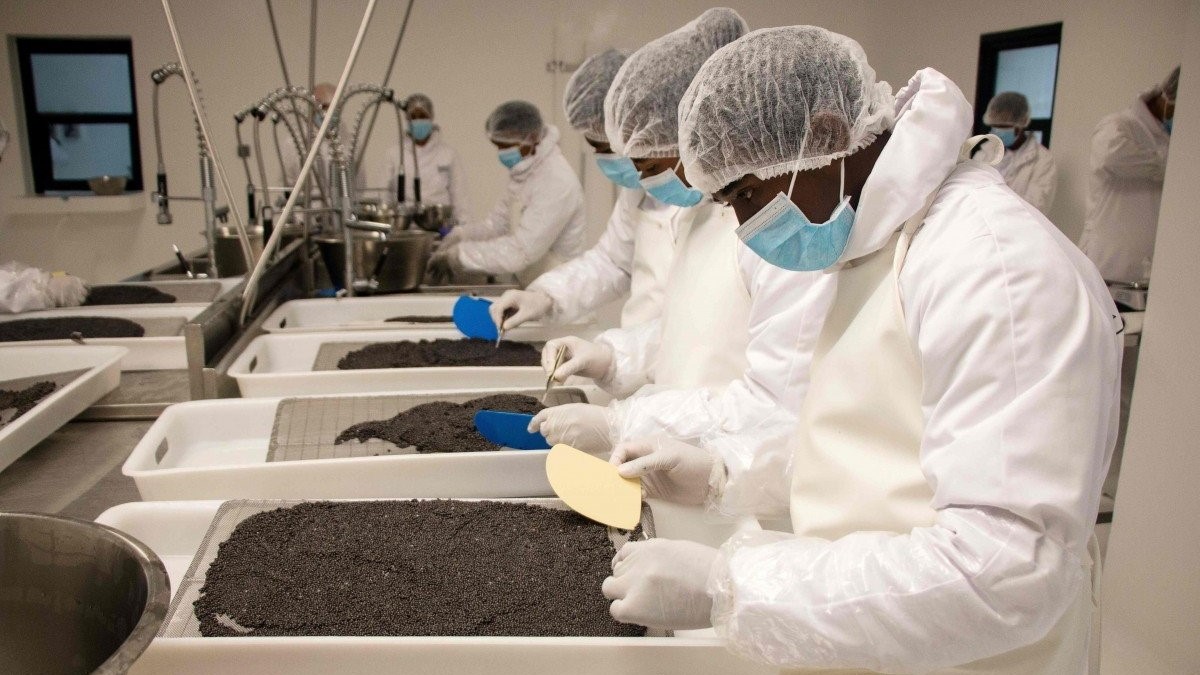