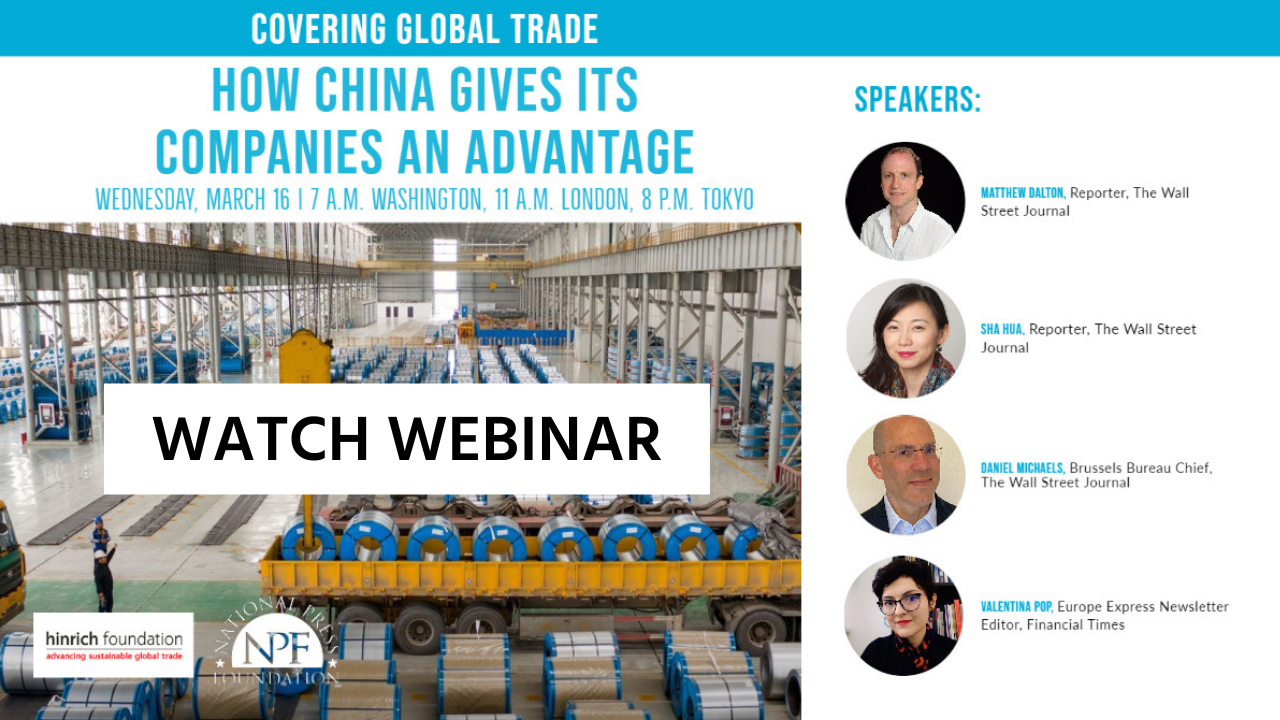 As Russia's invasion of Ukraine enters its second month, global attention has been following China's response to the crisis. Can the country continue to remain neutral? Will China and Europe's 'frenemy' relationship change? Is life about to get harder for Chinese multinational corporations? Watch a recap of this National Press Foundation briefing, supported by the Hinrich Foundation.

In this latest instalment of our series on trade hosted by the National Press Foundation, four awardees of the 2021 Hinrich Foundation Award for Distinguished Reporting on Trade were invited to share their insights on how the Ukraine crisis has thrown global commerce into upheaval. Speakers included Valentina Pop of the Financial Times, and Matthew Dalton, Sha Hua, and Daniel Michaels of the Wall Street Journal. Here are six key takeaways:

1. A new map of global trade is forming.

The countries that voted to condemn Russia for invading Ukraine is a starting point for reporting on how trading arrangements are likely to change. This map by Axios shows the 141 nations that voted in favor of the UN general assembly, the four nations that voted against it, and importantly, the 35 countries that abstained and can be expected not to enforce US and EU sanctions against Russia. The US and EU response to these 39 nations, which have strong trade ties to Russia, could make for good stories. “As for the ones who abstain, it’s interesting,” said Valentina Pop, who covers European affairs and politics for the Financial Times in Brussels. “I think particularly what comes to mind is the stress that is now put on China and the pressure that is put now on China not to side with Russia and supply arms or any other support for the war.”

2. For China’s reaction, look to the April 1 EU-China summit in Brussels.

Four of the six journalists who won the 2021 Hinrich Foundation Award for Distinguished Reporting on Trade joined the National Press Foundation on March 16, 2022 to discuss their award-winning work on how Beijing has used its power and political leverage to give Chinese companies a permanent advantage in the global marketplace – and the new pressures facing China as a result of the world’s reaction to Russia’s invasion of Ukraine. “One of the messages that you hear here in Brussels often is that the close coordination between the US and the EU on sanctions was also a message to China, that this can happen to China as well,” Pop said. “Now, how feasible that actually is, given the economic intertwined-ness of both the US economy and the EU economy with China, that’s a different question.” In December 2019, before the COVID-19 pandemic, then German Chancellor Angela Merkel and the EU had begun work on a comprehensive EU-China trade and investment agreement, Pop said. This collapsed a few months later after China imposed sanctions on EU parliamentarians who had been critical of Beijing’s alleged human rights abuses in Xinjiang province, Pop said. “On April 1st, they will want to try and repair a bit of that relationship, and officials here don’t expect the comprehensive agreement on investment to be resurrected necessarily, but at least, talks between President Xi Jinping and EU leaders here… They would want to signal that Europe is not necessarily hostile.”  [A full transcript of the journalists’ remarks is here.].

“China and Germany have had this very interesting frenemy thing going on for a while, because obviously China really wants to buy machines, and the one country that really likes to produce a lot of machines is Germany,” said Sha Hua of the Wall Street Journal, speaking from Hong Kong. “China looks at Germany as an industrial nation says, actually, we prefer what they have. They’ve been learning a lot from Germany.” But in the past four years, German companies that had been cooperating with China have realized that they are nurturing a fierce competitor that might one day surpass them, not just with high-speed railways but also solar panels and other industrial goods, Sha said. “The German embassy, according to German media reporting recently, has sent a report to Berlin to basically say, well, maybe we should rethink some of the corporation that is going on, and delineate more clearly where we want to continue to cooperate and where we actually see real competition, and where we need to be a little bit more protective of what we have.”

4. Western sanctions are crippling the Russian economy with record speed.

“Economic and financial warfare are very effective,” said Daniel Michaels, Brussels Bureau Chief for the Wall Street Journal.  The US and EU message to China about what might happen if China were to invade Taiwan is unmistakable. But China’s economy is far larger than Russia and the blowback to the Western economies from any sanctions enforcement actions against China would be far larger, Michaels warned. Still, the US power to disrupt Chinese companies is enormous, as shown by the significant damage that US sanctions have inflicted on Huawei. The tool “allows the US to restrict, not just direct US exports of products, but potentially any product that uses US components, blueprints, software, IP, produced anywhere,” Michaels said. “If, for example, a German company is producing something that has a US microchip or some kind of US technology… The US can say, you may not export this. The US has a track record of enforcing its sanctions in third countries.”

5. Will China be able to continue to remain neutral in the West’s widening conflict with Russia?

To a large degree, yes, the journalists said.  “Given how interlocked the Western economies are with China, there’s going to be a strong hesitancy to really unload on China the way the West has on Russia,” said Michaels. “China arguably also has greater leverage. We had a story that Saudi Arabia is considering selling oil to China in yuan rather than in dollars. China has the world’s second largest economy after the US, the Russian economy is, I think, the world’s 17th largest, about the size of Spain.” He added: “Arguably, China’s political incentive for helping Russia is much less than its economic incentive. Its economic ties to the West are much greater than its economic ties.”

Matthew Dalton, a Journal correspondent in Paris, said Chinese foreign direct investment was under scrutiny both in Europe and by CFIUS, the Committee on Foreign Investment in the US. (pronounced “SIF-ius.”) With China’s ambiguous stance on Russia in the current invasion, I think that’s only going to become more pronounced. I think it’s going to be very difficult for a big Chinese controlled company, a state-controlled company to make a big acquisition in the US or the West. I think that it’s going to be basically impossible. The only way they can do it is if they take a lot of measures to try and hide their involvement in the transaction. We have seen some examples of that happening.” For tips about how Chinese companies are being affected, Dalton suggested checking their filings on the Shanghai Stock Exchange. They might not talk to Western or even Chinese journalists, but the companies do have to put information into securities filings – and some documents are even in English, Dalton said.