China's subsidization of state-owned enterprises allow the country to transform from a net importer of critical intermediary goods, to a leading global exporter of these products. What are the mechanisms behind?

From importer to global supplier in no time

In the 2000s, over a span of five years or so, China went from a net importer of critical intermediary goods such as glass, paper, steel, and auto parts, to becoming the leading producer and dominant global exporter of these products. How could this seismic shift occur in industries where China does not maintain a particular advantage in labor, technology, or natural resources?

According to Professors Usha Haley and George Haley in their 2013 book, Subsidies to Chinese Industry: State Capitalism, Business Strategy, and Trade Policy, the answer in large part is subsidization of Chinese production in the form of state-directed capital flows.

Government financing has fueled investments in capital-intensive manufacturing industries in China, inducing overproduction and creating a glut in global markets as supply began to outstrip demand in the Chinese market. The influx of large volumes of commodities in the global market set in motion a downward spiral in prices and profitability, adversely impacting producers in other countries.

The price of inefficiency

In testimony to Congress, Professor Usha Haley said that labor-intensive products constituted 37 percent of all Chinese exports in 2000, but that by 2010, this fell to 14 percent, so low-cost labor does not explain the rise of China as global producer of capital-intensive goods.

Over this period, what contributed more significantly to China’s competitive advantage in key manufacturing sectors was industrial subsidies that Professor Haley calculates exceeded 30 percent of the value of industrial output.

What does that look like in dollar terms? The authors cite data from China’s Statistical Yearbook: Subsidies to state-owned enterprises (SOEs), combined with funds for R&D, funds for technology acquisitions, and other state appropriations likely amounted to some US$310.1 billion between 1995 and 2005. About US$151.1 billion was channeled to SOEs, 95 percent of which were operating at a loss.

Measuring the true cost of government subsidies is difficult in any circumstance. It’s particularly difficult in the case of China owing to a lack of transparency and data that is unreported, misreported, or otherwise unverifiable. Significantly, subsidies also take the form of free or low-cost loans and artificially cheap raw materials, components, energy, and land, avenues for delivering cost savings and capital that are perniciously hard to track.

The re-ordering of dominant suppliers happened swiftly and decisively. Having gathered end user and reference prices from a variety of private sources and government reports, researchers Haley and Haley delve into four industries to illustrate the point.

They calculate that China’s glass industry received US$30.3 billion in subsidies from 2004 to 2008, including cheap inputs such as coal, electricity, and soda ash. By 2008, Chinese production accounted for over 31 percent of global production and China’s exports grew from US$1.15 billion to US$7.1 billion. A similar story played out for the paper and paper products industry, which the authors calculate received US$33.1 billion in subsidies from 2002 to 2009 to become the world’s fastest growing producers despite having to import pulp and recycled paper as key inputs.

The meteoric rise of Chinese production of steel and aluminum products is also a well-documented case. Between 2009 and 2018, Chinese producers increased production by 288 percent, and now produce nearly as much as the rest of the world combined. 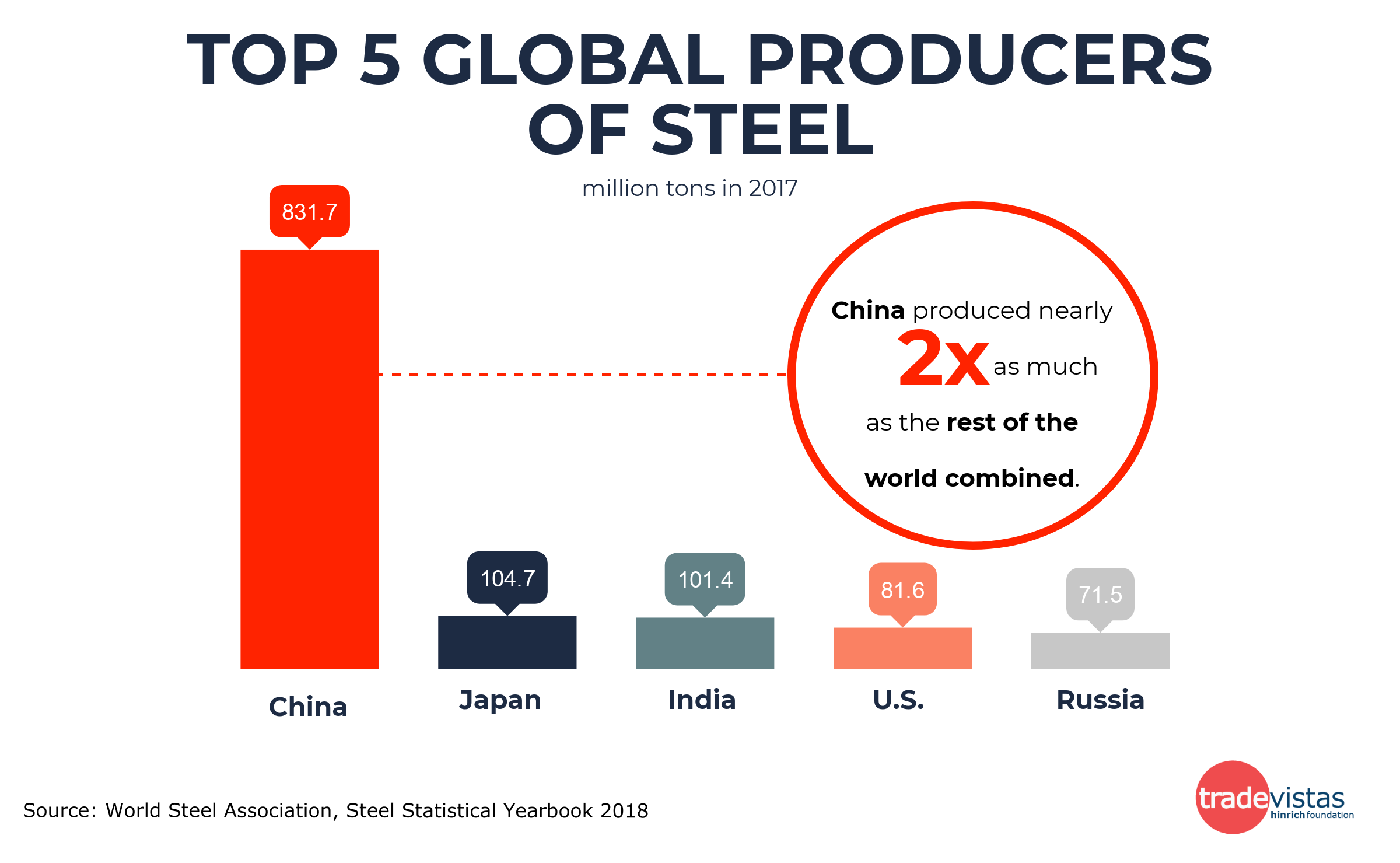 As difficult as it is to calculate the true amount of subsidization, what may become the focus on international discussions going forward is the type and form that these subsidies take and whether global trade disciplines have enough reach to discourage their trade-distorting effects. At question is the state’s control of capital, the direction of financial flows to state-owned enterprises, and preferential access to critical inputs at below market rates. Haley and Haley describe these three primary ways that government money props up production in China.

Easy access to capital – Provincial and local governments play a large role by securing free or low-interest loan rates from state-owned banks and steering those capital flows into fixed-asset investments in plants, equipment, real estate. They have created thousands of arm’s length financing vehicles to circumvent central banking rules. Banks are compelled to issue loans even if they book them as unpayable. The main goal of local officials is stability in the form of jobs and social benefits, but cheap loans support investments in fixed assets that create overcapacity and incentivize overproduction.

“Shadow financing” or lending off the balance sheet – Nonfinancial companies lend money directly to each other. The banks take fees as intermediaries, but the loans stay off their books. Haley and Haley say these types of “designated loans” amounted to around RMB 1.1 trillion in 2010, versus an average RMB 264 billion per year from 2003 to 2009. These types of loans and informal promises of repayment characterize the opacity of capital flows in China. A lack of transparent reporting among companies and banks also obscures accurate assessments of liabilities taken on by the state, which ultimately guarantees repayment of loans to SOEs.

Subsidies to energy, land, and technology inputs – China overtook the United States as the largest consumer of energy in the world a decade ago, with Chinese industry accounting for more than 70 percent of China’s total energy consumption. Provincial and local governments hold down costs to industry of using energy in manufacturing through their control over a substantial portion of energy generation, coal production, and electricity distribution. Producers also take advantage of sourcing components and raw materials from other SOEs below cost and can avail themselves of government financing for R&D and technology acquisition.

The state as shareholder

But accounting practices in China can be inconsistent with international standards, and SOEs sometimes record government subsidies as profit or revenue. For these companies, the state is the paramount shareholder, not private investors. Provincial and local government officials may be more motivated at times by the desire to maintain employment, provide housing and other social services. Unmotivated by profit, they are willing to invest funds in unprofitable companies. State-owned enterprises for their part are under pressure to meet the non-financial demands of their government backers whether those goals relate to defense, employment, technology acquisition or competitive advantage.

Where subsidies abound, producers have no incentive to take market demand signals, no incentive to consolidate or shutter loss-making enterprises, and no need to raise prices; firms that are inefficient can nonetheless compete in global markets if subsidized. Recent efforts by China’s central government to remove or reduce incentives to overproduce are often countered by local officials who are the primary beneficiaries of production in their provinces or cities.

The Subsidies and Countervailing Measures Agreement (SCM) in the WTO defines a subsidy as a financial contribution by a government or public body, which confers a benefit and which is “specific,” meaning it is granted to an enterprise or industry, or a group of enterprises or industries.

The agreement delineates types of financial contributions that are subsidies. They include: direct transfers of funds such as grants, loans and equity infusions, loan guarantees, and the provision by a government of goods and services other than general infrastructure, among other types of contributions that confer a benefit to the recipients and that have adverse effects on a trading partner. Serious prejudice may arise if the subsidy reduces exports of WTO members, results in significant price undercutting, or increases the world market share of the subsidizing country in a primary product.

In its commitments upon joining the WTO, China agreed to eliminate subsidies to loss-making SOEs by 2000. It wasn’t until 2006 that China submitted an overdue notification in which the government identified 78 subsidy programs from 2001 to 2004, but the annual amounts were not well documented, muddying any ability to assess distortions to trade. The notification only included subsidies and programs supported by central government. It did not cover lending policies of commercial banks or other financial preferences offered to SOEs. The Chinese Government did not submit another notification until October 2015, a submission the United States asserts remains deficient.

Until more discussion among WTO members occurs on the basis of notifications of government subsidies with verifiable data, we are likely to see more disputes and more tariff countermeasures.

Tariffs, however, do not provide an effective antidote to the root problem of financial subsidies. Despite the tariffs, Chinese companies may continue to enjoy the benefit of financial subsidies provided by the Chinese government. To the extent they do, distortions to global markets will continue.