Bereft of leadership from either East or West, the international trade regime will stumble along sub-optimally for the foreseeable future. Pragmatic calculations of risk and opportunity and management of particular issues are more needed than the blind chase of a definitive 'reinvention' of global trade.

Let’s not believe our own propaganda. Asia reinventing global trade is a superficially attractive but problematic proposition. It assumes that there once was a free international economy open to reinvention, and that’s a stretch. It assumes that there is an ‘Asia’ in more than the trite geographic sense and that what defines ‘Asia’ is a common attitude towards trade, somehow superior to the attitudes of other regions. It also assumes that this mythical ‘Asia’ can rescue the international trade regime from the pressures it has been subjected to, or at least mitigate those pressures. None of these assumptions is valid.

True, Asia is home to the Regional Comprehensive Economic Partnership (RCEP) and the Comprehensive and Progressive Agreement for Tran-Pacific Partnership trade pacts, and most Asian countries generally have more open attitudes towards trade than some of the attitudes that have emerged in the United States and Europe. This is unsurprising since most of Asia consists of trading states. But ‘most’ is not all, and trading states are not always free trade states. The most important exceptions are India and China. These giants represent huge deviations which far outweigh middle-power free traders such as Japan, South Korea and Australia, let alone small economies like Singapore or Taiwan.

Indian and Chinese attitudes towards free trade are ambivalent if not downright mercantilist. These attitudes are inherent to their respective political systems. India and China are not static but respond primarily to their own imperatives and according to their own dynamics. Neither are likely to evolve teleologically, forever up and on towards ever-freer trade.

The hope and promise of Narendra Modi’s election as prime minister in 2014 were based on a faulty extrapolation from the business friendly environment he was said to have nurtured in Gujarat. But being business friendly is not the same as being trade friendly. India’s withdrawal from RCEP is proof positive that whatever else is on Modi’s economic agenda, trade liberalisation is not a priority. We must all piously hope that India will one day return to RCEP. But don’t hold your breath. What matters most to Modi and the Bharatiya Janata Party (BJP) is power. The ultimate source of power is money which is the sine qua non of electoral success in India. To get the donations needed to lubricate the system, Modi needs to please Indian, not foreign, business. Indian businesses are not instinctively free traders, particularly the small businesses that are the backbone of the BJP’s base. Many of these small businessmen are happy with India’s licence raj system because their skill at navigating that labyrinth gives them an advantage over foreign competitors. That China seems to have become equally skilled at this game—witness India’s trade deficit with China—is a political complication for the BJP.

Modi has not even always found it necessary to pursue economic rationality, let alone free trade orthodoxy, to hold on to power and secure Indian business support. Many of his policies such as demonetisation have been economic failures but political successes. Against all predictions, Modi won the 2019 elections by a landslide. But what choice do Indian businesses, big or small, have? The Congress Party is in shambles. And it is not as if Congress is committed to free trade either.

India is nevertheless open compared to China. The most salient fact about Chinese economic (or any other) policy is so obvious it’s almost invisible: China carries the baggage of communism. Of course, no longer in its ideology, which today is based on an assertive ethnonationalism rather than class struggle, but certainly in its political structure. China’s origins were as a Leninist state led by a Leninist style vanguard party, the Chinese Communist Party (CCP).

A Leninist party’s primary value—the core interest to which all other interests are subordinate—is control. The CCP claims absolute control over all dimensions—internal and external—of state and society. President Xi Jinping has enforced this claim more thoroughly than any of his immediate predecessors. The CCP’s overriding interests, coupled with assertive ethnonationalism which seems to enjoy wide popular support, are the root cause of many of China’s economic and geopolitical behaviours that have aroused concerns across the region, indeed globally.

The purpose of economic reform in China is always to preserve that system. This was the primary reason for ‘reform and opening up’ under Deng Xiaoping. It remains the primary reason under all his successors, including whoever will eventually succeed Xi Jinping. China is undoubtedly one of the chief beneficiaries of the open trading system, but China will uphold the values and practices of free trade only if they reinforce the Leninist system and the CCP’s interests.

Insofar as China achieves greater self-sufficiency under the new approach of ‘dual circulation’, the mercantilist element in Chinese trade policy will be enhanced because Beijing will have even less reason to abide by international norms unless it suits the CCP’s interests.

There is no practical alternative to CCP rule. Other alternatives will pose even greater challenges. Imagine, for instance, a multi-party China whose political dynamic is driven by assertive ethnonationalism. Any analysis of trade in ‘Asia’ therefore confronts a central and permanent paradox: China is one of the main locomotives of the region’s growth, but China is also at the heart of most of the instabilities and imbalances that threaten to derail the region’s growth. China will always be simultaneously the problem and part of the solution.

Nor can the rest of Asia claim superior virtue, except in relative terms. Complaints about Japanese and South Korean unfair trade practices are legion and have been for a long time. Even Australia and Singapore, who like to think of themselves as devout upholders of a free trade, can do so only by ignoring the beams in their own eyes.

Domestic politics are the primary source of pressure on the international trading system. The dynamics differ from country to country but none is particularly susceptible to external influence or example. We must each manage our own politics the best we can, and no one is handling them particularly well. It is difficult to imagine the global trading system being ‘reinvented’ unless the United States and the major European economies change their attitudes.

Western democratic politics are dysfunctional by design to prevent an over-concentration of power. But of late, politics in the United States and Europe have perhaps become more dysfunctional. Meaningful political reform in the West is highly improbable.

China is better placed to decide on and pursue long-term goals. But authoritarian systems have their own shortcomings. They have an advantage only if decisions are correct in the first place. Deng’s decision to reform was correct; Mao Zedong’s ‘Great Leap Forward’ and Cultural Revolution were disasters. Xi’s decision to abandon Deng’s sage approach of ‘hiding capabilities and biding time’ was a strategic mistake. Once revealed, ambitions are not easily forgotten and inevitably provoke counter-reactions, as we are already witnessing.

Not all problems have solutions; not everything desirable is achievable. Bereft of leadership from either East or West, the international trade regime will stumble along sub-optimally for the foreseeable future. But it is unlikely to entirely collapse, provided ad hoc and flexible coalitions of the like-minded—from which China should not be a priori excluded—pragmatically calculate risk and opportunity and manage particular issues, rather than chase the chimaera of definitively ‘reinventing’ global trade.

Bilahari Kausikan is Chairman of the Middle East Institute, an autonomous institute of the National University of Singapore. 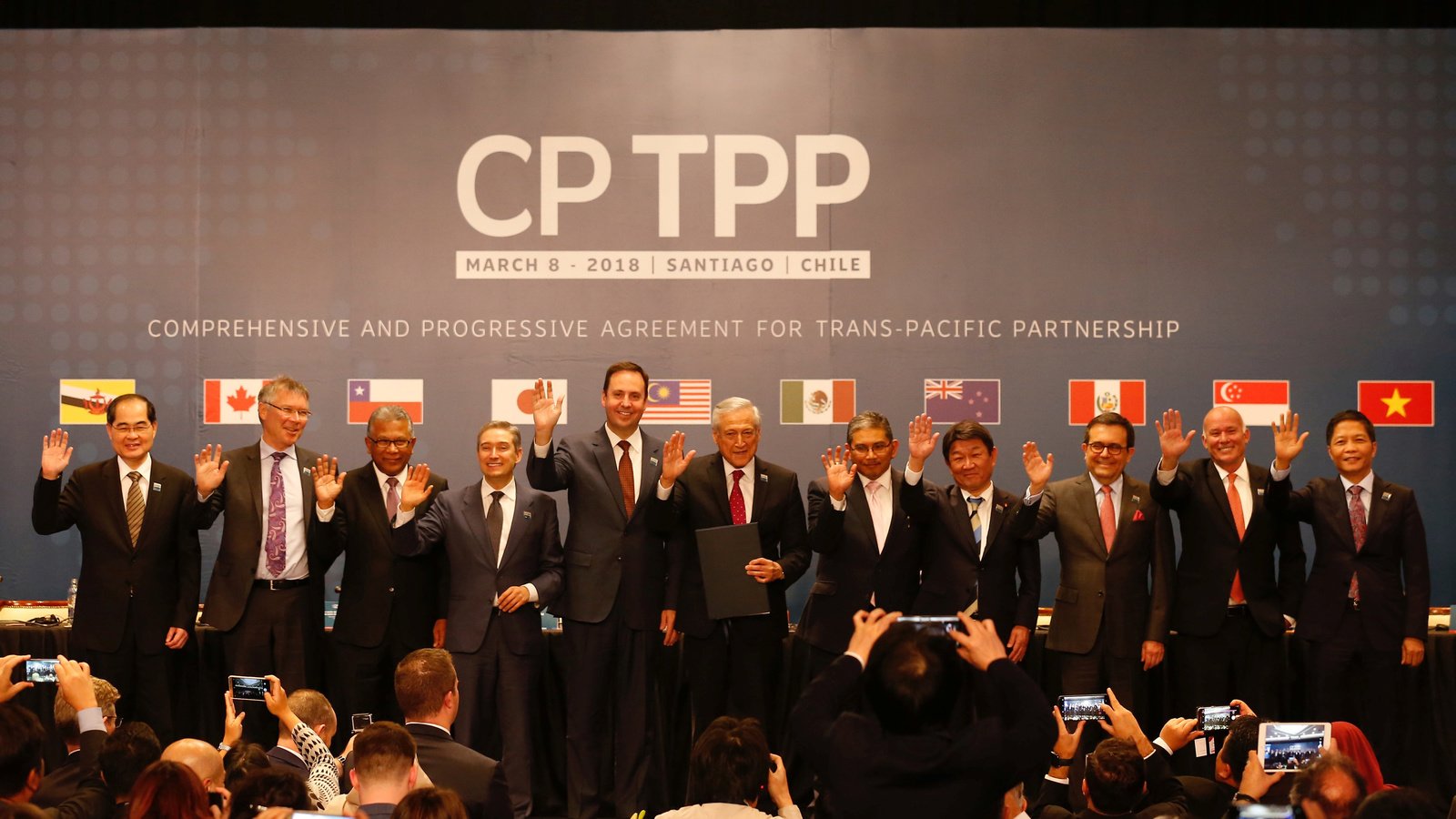