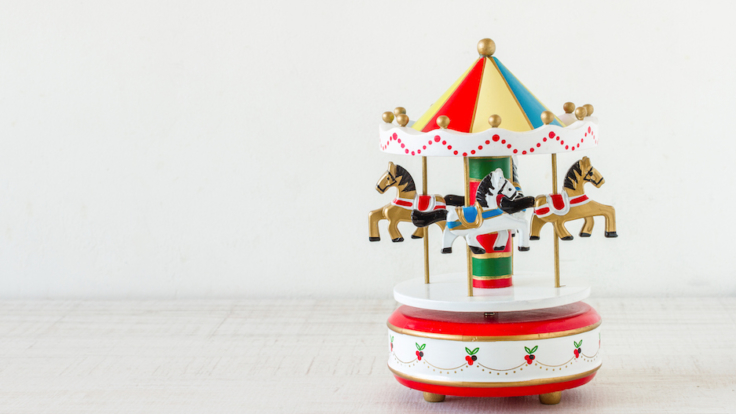 The US is using what is known as "carousel retaliation" — a regular rotation of goods targeted for tariffs, designed to impose maximum pain.

On October 2, 2019, a World Trade Organization (WTO) arbitrator rendered a decision that authorized the United States to apply retaliatory tariffs on as much as US$7.5 billion worth of European exports each year until WTO-illegal European subsidies to its aircraft industry were removed. In a press release issued that day, the U.S. Trade Representative (USTR) announced that beginning October 18, the United States would apply WTO-approved tariffs on a list of EU products. The list included 10 percent duties on civil aircraft, but also 25 percent duties on goods we consume directly including butter, various cheeses, clementines, clams, green olives and single-malt Irish and Scotch Whiskies.

Before their next cocktail party, US shoppers might have stocked up to beat the tariffs, but the most trade-savvy shoppers would have known not to go overboard buying Parmigiano Reggiano. That’s because the US administration has statutory authority to use “carousel” retaliation – a regular rotation of goods targeted for tariffs, designed to inject uncertainty and impose maximum pain.

On August 12, 2020 USTR issued the latest modifications to the list of products subject to retaliation, which will take effect on September 1. The United States and Europe have been on this ride before.

In a trade dispute, the parties first enter into consultations. If they are unable to come to an agreement, the complainant may request a WTO panel to review the dispute. Once the panel issues a report, the WTO Dispute Settlement Body (DSB) will adopt it, unless a party appeals it or all DSB members vote against adoption.

If there is an appeal, the Appellate Body reviews the case and delivers its findings, together with the panel report as modified by the appeal, to the DSB. If the complaining party wins, the losing party is given a “reasonable” period of time to implement the decision. The original panel may be called upon to determine if the losing party implemented the ruling in the agreed time frame. If not, there are two alternatives for the party bringing the case: seek compensation or retaliate.

In the latter case, the complainant estimates its loss, the losing party can seek arbitration on the level, and the DSB authorizes the final amount. Such countermeasures should be “equivalent” to the injury caused and “related to” the economic sector of the illegal measure, with the goal to induce the removal of the offending measure. Often the offending party will, in fact, withdraw the measure before the imposition of authorized retaliatory measures. Beef and bananas – How the carousel started

In some cases, applying tariffs on imports isn’t enough to induce compliance. When the United States, Ecuador, Honduras, Guatemala and Mexico won their case in the WTO challenging the legality of Europe’s banana import policy, the European Union (EU) failed to comply with the ruling, even in the face of nearly US$200 million in US tariffs. US banana exporters, increasingly frustrated with the EU’s lack of compliance with the WTO ruling, looked to Congress to enact a new tool to increase the pressure.

They found allies in US livestock exporters, who had won a WTO case that a European ban on US imports of meat produced with hormones was inconsistent with the EU’s WTO obligations. As with the banana case, the EU had employed delaying tactics to stall implementation of the panel decision against it.

Two months after USTR imposed retaliatory tariffs in the beef hormone dispute, a group of Senators introduced S.1619, the Carousel Retaliation Act of 1999. Proposed as an amendment to Section 301 of the Trade Act of 1974 (Trade Act), its provisions would have required USTR to “carousel” or rotate the products on its tariff retaliation list when an offending country does not implement a WTO decision.

More specifically, USTR was to rotate items 120 days after the first retaliation list and every 180 days thereafter, with the ability to opt not to do so if compliance was imminent or rotation deemed unnecessary. The bill language ultimately became part of the Trade and Development Act of 2000. While banana and meat producers were supportive, other industries were not. Some argued that frequently rotating the products subjects to tariffs would be challenging for retailers. The EU contended the method was WTO inconsistent, though the WTO never ruled on the matter.

USTR ultimately did not pull the trigger to rotate its retaliatory tariff list in either the banana or beef cases as the matters got bound up in a separate dispute over US tax benefits for foreign sales corporations (FSC). The EU had previously won a case against FSC and the US amended its law in November 2000 in response. The EU challenged whether that revision brought the measure into WTO compliance. The United States and EU agreed informally that the EU would not pursue sanctions in the FSC case, but if the United States revised its product lists under the carousel retaliation provisions, all bets were off. Ultimately, the WTO ruled the revised US law was not compliant, the United States lost its appeal, and the issue was not resolved until five years later.

Others get on the ride

The United States develops retaliation lists with an eye to maximizing pain on the trading partner that committed the foul, while trying to minimize the inevitable adverse impact on its own consumers and firms. In the past, Mexico has adeptly turned this practice against the United States in response to practices it viewed as inconsistent with WTO or NAFTA obligations.

During the original NAFTA negotiations, the United States and Mexico agreed to phase out restrictions on cross-border passenger and cargo services. In 1995, however, the United States announced it would not lift restrictions on Mexican trucks and, in 2001, a NAFTA dispute panel found the US to be in breach of its obligations. After years of negotiation and a false start with a US pilot program, Mexico retaliated in 2009 on more than US$2 billion worth of US goods.

Mexico used a carousel approach, rotating different products on and off the retaliation list. The first list of 89 products went into effect in March 2009. The list was revised in August 2010, by removing 16 of the listed products and adding 26 more, bringing the total number of products on the updated list to 99. Through this method, Mexico was able to target key pain points, leading the US to institute another pilot program in 2011, and Mexico to remove its tariffs.

In March 2019, Mexico’s Deputy Economy Minister Luz Maria de la Mora stated that if the United States did not repeal the tariffs, her government would have an updated list of US targets facing tariffs on its “carousel” in about two months, noting that Mexico would add some products and remove others. In early May, she announced the revised list was ready and under final review. Ultimately, the United States agreed in mid-May to remove its tariffs, hoping to boost the chances of ratification of the United States-Mexico-Canada (USMCA) agreement.

Round and round we go

Following the October 2019 imposition of retaliatory tariffs on EU goods, and in accordance with section 306(c) of the Trade Act, the U.S. Trade Representative announced the beginning of the first 120-day review of the action on December 12, 2019. After receiving nearly 26,000 comments, the US determined it would increase the tariff rate imposed on aircraft imported from the EU to 15% from 10% effective March 18, 2020, while making only minor changes to the previously released non-aircraft product list.

Fast forward to the present. In a notice issued August 12, 2020, USTR stated that the EU and its member states had not come into compliance with WTO decisions. Having conducted another review and solicited public comments, USTR said it would remove Greek cheese and UK biscuits from the tariff list, and add jams made in Germany and France, effective September 1. The total amount of products subject to countermeasures remains unchanged at US$7.5 billion, and the tariff rates remain the same at 15% for aircraft and 25% for all other products.

Adding to the drama of the US carousel review this summer is anticipation of a WTO ruling in the coming months on a parallel case related to US subsidies to Boeing. Barring a US-EU accord, expect to see Europe impose WTO-authorized retaliatory tariffs on US exports, with the amount on which Europe can retaliate still to be determined. While USTR’s August announcement indicated that Washington would initiate a new process with the EU to try to reach a long-term solution, it also underscored that its action might be revised “immediately upon any imposition of additional duties on US products” in connection with the large civil aircraft dispute.

Perhaps symbolic of the differences that the United States and Europe are trying to bridge, in America carousels turn counterclockwise and in England and much of Europe, they rotate clockwise. There are no height restrictions to get on this tariff retaliation ride in Brussels or Washington, but riders on both sides of the ocean need to buckle up.

Editor’s note: This post was originally published in October 2019 and has been updated for accuracy and comprehensiveness.