US and EU look for a deal on subsidies, while eyeing China The decision by the US and EU to suspend the Boeing-Airbus tariffs represents only the first tentative step towards attempt to hammer out a deal on subsidies. As negotiators in Washington and Brussels get to work on what is essentially a bilateral dispute, their broader – and perhaps more important – concern actually lies with China.

The US and EU have agreed to temporarily suspend roughly US$11.5 billion in tariffs they’ve applied on each other as part of the longstanding Boeing-Airbus subsidies dispute. They hope to use the next four months or so to work out an agreement that will address the underlying subsidy concerns, establish new rules, and draw the highly acrimonious 16-year dispute to a final resolution. This would be the most concrete manifestation thus far of the anticipated thawing in cross-Atlantic trade relations under the Biden administration.

Making headway on subsidies will not be easy though. Current WTO provisions recognize the inevitability of subsidies and attempt to delineate between what should be considered “acceptable” and “prohibited”. But the Boeing-Airbus dispute demonstrates that the existing protocols are not up to the task. Far too many types of damaging subsidies are permitted or fall into grey areas.

As negotiators in Washington and Brussels roll up their sleeves and get to work on what is essentially a bilateral dispute, their broader – and perhaps more important – concern actually lies across the Pacific with China. China’s highly effective use of industrial policies and subsidies have catapulted Chinese companies to the head of the pack in several key strategic sectors, created damaging distortions in global markets, and outstripped the ability of existing trade rules to ensure fairness and order.

But it is the jaw-dropping scale of China’s subsidies that is most concerning. Indeed, as a portion of GDP China spends about as much on subsidies (approximately 3%) as the US spends on defense. And opaque relationships and unwritten understandings between private companies, state-owned enterprises, and government departments means that the full extent of China’s subsidies are probably underestimated.  Worse yet, the interconnected nature of global markets means that what happens in China definitely does not stay in China. The recent global steel glut, giving rise to an unhelpful spate of dumping, was largely the result of China’s subsidization of its steel industry and the resulting over-production.

And perhaps of most relevance for the Boeing-Airbus discussions, China’s commercial aviation sector has advanced in leaps and bounds, in no small part due to government backing. The state-owned Commercial Aircraft Corporation of China (COMAC) is poised to launch its C919 airliner, which is expected to compete head-to-head with the Boeing B737 and the Airbus A320 – two workhorses of the global civilian aviation fleet.

The US-EU work program will endeavor therefore not only to resolve the Boeing-Airbus dispute, but to also address “the trade distortive practices of and challenges posed by new entrants to the sector from non-market economies, such as China.” This is a clear and simple reflection of the reality that China’s subsidization programs have been so impactful that no real progress can be made on subsidies without tackling the China issues head-on.

The US-EU effort comes little more than a year after both sides joined Japan in issuing a ministerial statement on strengthening WTO rules on industrial subsidies. The trilateral statement recognized that the existing WTO list of prohibited subsidies is inadequate and recommended a number of additions. The three partners also agreed that “excessively” large subsidies can be so damaging that the burden of proof should be reversed. Countries would have to demonstrate that such subsidies do not produce serious negative trade effects.

The ministerial statement also identified the need to address subsidies which wreak havoc in markets by creating “massive manufacturing capacity”, as has been witnessed in the steel sector. And although not referencing China by name, the statement also pointed to state enterprises as a primary conduit for subsidies and called for a far broader understanding of what constitutes a “public body.”

The trilateral statement will likely act as a jumping off point for the US and EU to advance the work further in the context of the Boeing-Airbus discussions.

A basic question, however, hangs over the entire US-EU exercise: China will not be bound by any agreement on subsidies reached by the US and EU, so – to be blunt – what’s the point?

In essence, the US and the EU are playing a long game here. The real hope is that they can develop innovative approaches to mitigate the distortive impact of subsidies beyond what we currently have on the trade law books, revise definitions, and establish useful boundaries. Short of being able to directly reign in China’s subsidies, the US and EU will look for ways to buttress defenses against their deleterious impact and attempt to galvanize momentum among like-minded market economies for further progress in addressing subsidies.

We know from previous experience that when two trade partners break new ground in dealing with nettlesome trade irritants, others frequently follow their lead, incorporating the relevant provisions into their agreements or at least using them as a reference point for negotiations. As any new principles on subsidies that the US and EU might develop are increasingly accepted and incorporated elsewhere (in whole or in part) it solidifies consensus and makes it progressively more difficult for China to maintain contrary policies in the face of emerging new standards and norms.

The holy grail of course would be for these new principles to eventually be incorporated on a binding basis into the WTO. The short terms prospects for that are absolutely nil, but increased acceptance elsewhere will usefully advance the ball further down the field. And over the longer term, if the WTO wishes to have any relevancy, it has no choice but to deal with the issue of subsidies more meaningfully.

A difficult but worthwhile effort

The decision by the US and EU to suspend the Boeing-Airbus tariffs and attempt to hammer out a deal on subsidies (with an eye towards China) represents only the first tentative step in what will undoubtedly be a difficult journey. It remains to be seen how successful those efforts ultimately will be. President Biden’s desire to establish a common front with the EU to address trade complaints with China will provide a strong political impetus to the effort, but the negotiations will also test just how much commonality in policy perspectives actually exists between the US and the EU. Fissures will undoubtedly be revealed. But given the pernicious role played by subsidies – as evidenced by the length and acrimony of the Boeing-Airbus dispute – and the magnitude and impact of China’s subsidy programs, the effort is well worthwhile and should be supported and encouraged. 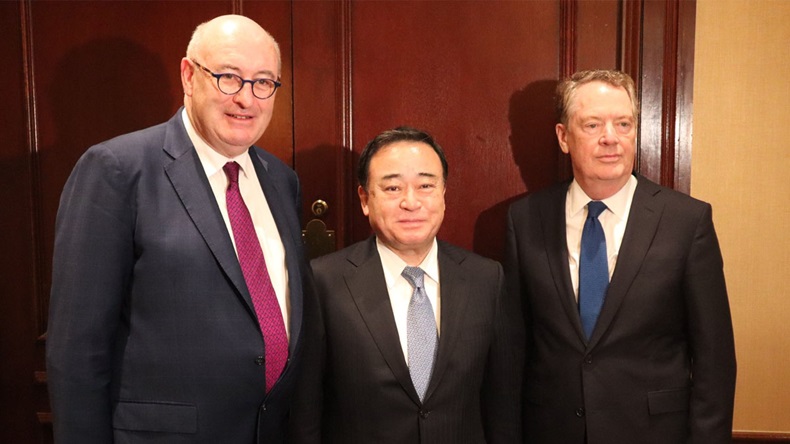